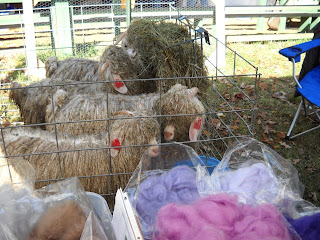 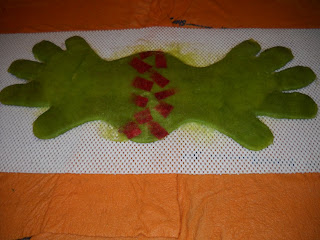 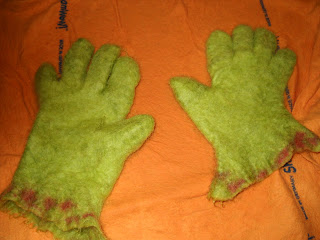 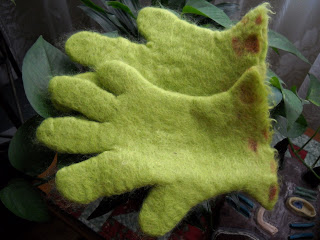 A month ago, with the help and encouragement of my wonderful friend Kim, I began my first pair of gloves.

I had been wanting to use the acid-green mohair that came from these adorable angora goats for some time now.

I just love this wild color!!

As Kim advised, if you try these, remember to make a bump at the 'wrist' of your resist...

...or else you will never get them on after felting.

...(after my failure, when I wrote to her, asking for suggestions)...

...wrapping the other fingers in plastic as you work on each one...

...something that had eluded me as I struggled to keep the gloves from turning into mittens! Grin.

My biggest difficulty, however, was that I had made the fatal felting foible of not making a sample first!

...which is a pair of gloves that look adorable...

...but which never fully felted and are still 'hairy and slippery', inside and out.

...but because I found this project rather difficult and trying...

...the idea of wrapping each finger again is not 'sending me anywhere'.

Posted by Heather Woollove at 5:24 AM

they look good to me, gorgeous colour!

Thanks, Karen! I know...I just love that green, too.

Wow, when I was ill, I lost track of my blogs. And see where it got me. So far behind.

I would never have thought of making gloves in this way, so I give you credit. It could not have been too easy.

I love the sparkly blue scarf, and I don't even like blue. But that is really lovely. Good job there kiddo.

i also love the color, you used. too bad they are not felted enoug... I have had this too with the first pair , but as the kids were having small hands someone was able to use them, so I kept on felting.......

You could fill them with something what wouldn't felt and throw them into the washingmachine..... maybee they become felt after all. The "filling"of you gloves is just to make sure it will not shrink so much.But I think it will fit a child after doing this..... (maybee put them away for when grandchildern arrive???)

Oh my goodness - your gloves are gorgeous! And they must be so warm too :).