The inside of the roll with tapered pockets for different sized needles. 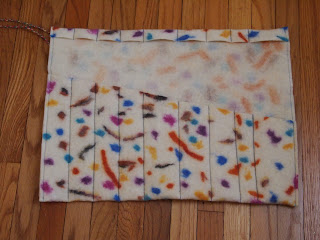 The outside of the roll...note placement of ties. 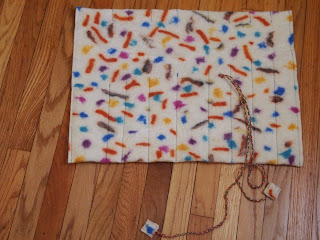 The piece all rolled up. 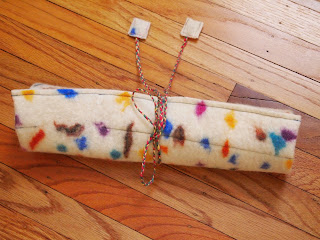 The knitting needle roll in action! :) 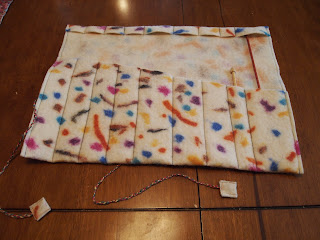 Once I had trimmed my piece of felt into a proper-sized rectangle...

...I folded in the top and bottom edges in order to get a sense of my eventual pocket placement.

At this point, I could get a feel for where my tie needed to be attached...

...so I pinned in on and machine stitched it to the flat felt.

Next, I calculated the height needed for the longest and shortest pockets...

...and using these measurements, made a diagonal cut along the front edge.

I pinned everything into place (making sure that the ties were pinned up and out of the way!)...

...and sewed the raw edges together, leaving a small seam allowance.

For the next step, I drew vertical lines onto my felt...

I continued the markings on the small upper hem as well...

...the function of which is to help hold the longest needles in place.

Following the drawn lines (and backtacking at the openings)...

...I stitched in the lines for the pockets.

As you can see, I have pitifully few knitting needles...

Posted by Heather Woollove at 4:03 AM

well heather, you have been thinking a lot before doing and the result is awesome! love,riet

It's wonderful!
I have a feeling that before I progress with my felting and weaving, I had better dust off Grandma's sewing machine. Argh! Every project I have liked lately had been touched with a sewing machine.

Your friend will love the needle holder.

So functional and pretty! I am really liking the white BG with the bright color accents.

Thanks, friends!!
You're right, Andrea...sometimes I'm quite glad that I used to sew a bit. It helps!!

Your work is so cheerful, Heather.
This is New Year confetti.

Oh, Joei...what a nice comment!
(I did grow up in the Midwest, you know...where being cheerful is almost a religion!!) Grin.