After removing the resists and completing the felting. 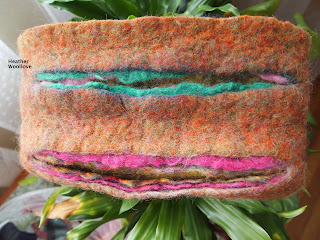 The end result of using so many layers of roving?

A finished felt that is far too thick and stiff. :( 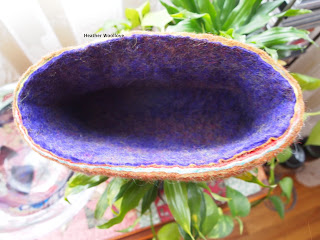 After stitching on strips of velcro and a leather loop. 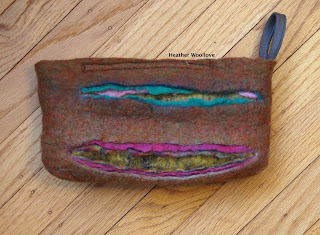 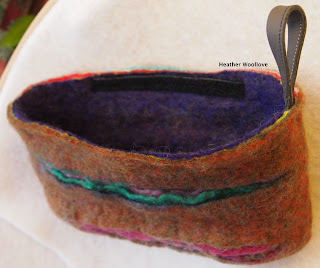 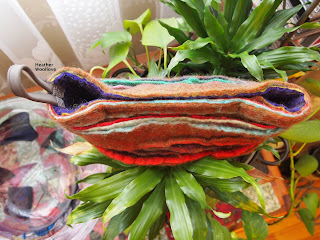 I was tempted to make it into a basket for rolls, but it was a bit too small. :) 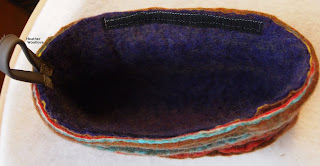 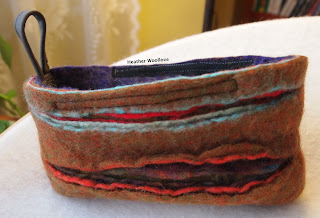 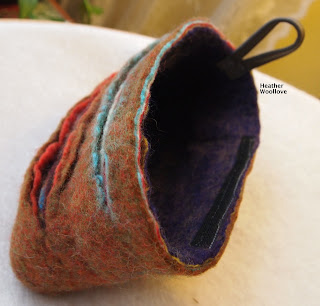 ...but I like the finished piece to actually reflect it. :)

I attempted a zipper closure when this was clutch was first completed...

...but working on felt as thick as this proved to be folly...

...and I gave up in frustration and settled on velcro, instead..

I took my time, felting each 'ruffle layer' as I removed each resist...

...but the end result is unsatisfying 'stumps' of ruffles and not true ruffles at all.

I know that there must be a better way of making a ruffled bag...

...but it may be using sewn-on-after-felting ruffles, and not resists at all.

I also know that I'm missing something important about the use of multiple resists...

Luckily, one of my 'felt scavenger' daughters snapped it up...

If any of you readers have had success with a project like this...

...please do write with suggestions and put me out of my misery!! Giggle.

Posted by Heather Woollove at 4:24 AM

oh, darn! I hate when you put so much work in to a project and it doesn't turn out like you want it. At least your daughter found a treasure in it.

I love it that your daughter has snapped the bag up, that's a reward in itself!
I am not sure how I would go about this project, but as for the ruffles, the wool for their base (where they are anchored) needs to be laid horizontally while the wool for the ruffles themselves needs to be laid vertically to the base, at 90 degrees angle. The base keeps shrinking but the vertical wool does not = ruffles. Hope it makes some sense.

It's a special look with colorful layers. Sometimes I also made not expected outcome but others like. This is a treasure she loves is rewarding.

It is definitely frustrating when the thing doesn't turn out like what you envisioned.

I loved all the photos and your use of colour is great!!

Maybe the ruffle resists needed to be bigger? Could you use something like a dowel as the resist?

I always learn a lot from your posts, Heather! I've wondered how to make those ruffles, and now I know how (even though you weren't satisfied with this project). Have a great weekend!

I have no pearls of wisdom - but yeah on the daughter snatching it up. Makes the sting of not having it come out the way you wanted much easier, no? :)

WHAT?!!! You think that is a disappointment?! You'd better pay attention to the daughter who made off with it, she is one smart cookie! It's gorgeous! I'm sure once you get past your expectations and see it with fresh eyes, you will find a new appreciation, it's really cool looking. As for the zipper, maybe you could stitch up a simple envelope liner w/zipper and hand tack it in the corners and a few strategic places?

Monika--That's a good 'ruffle tip'! Thanks!!!
Terrie, Kathryn and Pixiemoss--Thanks for your nice comments!
Rachel--I've never thought about using a dowel this way, but it could be a solution. Thanks for thinking of it!
Lindy--Hahaha...caveat emptor!!
Denise--You're right. I always find a home for these 'misfit felts'!! :)
Melissa--The fabric liner idea is a good one...although I'd hate to cover up the pretty aubergine lining on this one! :)

I'd imagine ruffles would be hard to create with felt since they need to be thin and poofy. Whatever technique to make feather light items might be worth a try.

To answer your question about silk, I do have pure silk yarn in the stash, waiting for the perfect project. Usually I use silk blend yarns, with merino or cashmere, to give them some loft and make them less slippery on the needles. I love how silk takes on colors!

Vivian--Sighh...I think all fiber artists would agree, there's just something special about silk! :)

Eh. You can't be happy with every project. I think it came out lovely, but then again I didn't put all that work into it. Chock it up as a learning experience?

Jess--Absolutely!! (I always have had to learn things the hard way!!) :)

I haven't ever tried anything like that, but good job for seeing it through! And it sounds like somebody loves it in your house, so that's always a good thing!! :)

oh heather it happened to me once too. too short ruffles, solving it the next time by making the layers of wool in between the resist thicker or at least evenly layered thick...as the thicker the wool the less shrinkage...
keep going dear you will get there succes!!

I like the layers of color...perhaps you could use it as a card basket?

Jess (SY)-Yes...with four daughters, someone always makes off with anything that sits on the dining table too long! :)
Kim--Thanks for the great tip. Now that you mention it, they were quite thinly laid out. When I try it again, I will definitely make them thicker!! XXO-
Ally--Yes..card basket is a good idea....if I can manage to steal it back from my child! Giggle.

I, too, thought it was beautiful. I like the look of the 'ruffles' I thought it had great texture and color.

Thanks, Tamara! It's nice to get others' perspective on it, since once it wasn't what I 'wanted', I had trouble seeing any good in it. :)

I have to say, I do like the first one better, but this one is still functional, even if it's not quite as nice as you wanted it to be. :)

Oh, not to worry...Those ruffles that are 'in' today will be passé tomorrow. You're just, as always, ahead of the curve;-)

Love your sense of adventure and sharing ..You know that you're a gem, don't you?

Oh, Dawn--You always make me smile! Thanks for the encouragement and love! :)