'Log cabin quilt' valances from my days as a 'sewist'. 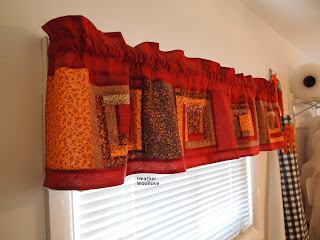 Laying out one layer of domestic wool roving... 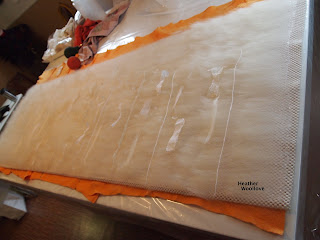 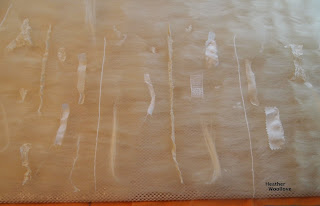 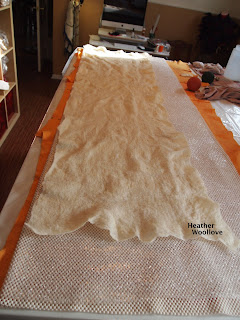 After ironing and drying. 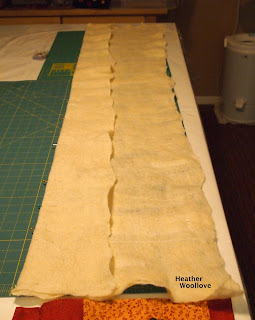 Pinning and marking stitching lines for the rod pocket. 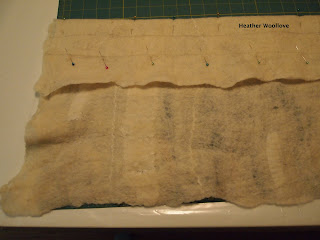 All ready to sew! 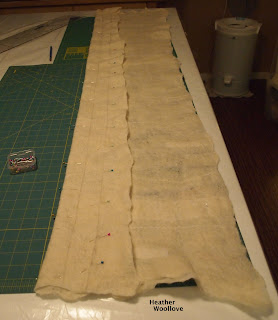 I have four studio windows...

...that were sorely in need of new curtains.

I had been musing about this project for some time, but without a clear direction...

...and then came the votive candle holders at Christmas-time!

It suddenly struck me that this sheer, white, luminous look was what I was after, all along...

...and I knew exactly what I needed to do!

Since I wanted 'unfussy' valances with irregular borders...

...(I had had enough geometry with my quilt-block ones)...

...I decided to use domestic wool roving that I had on hand.

It's a bit rough and not pure white in color...

...and I love the little 'hairy bits' that I found in it while felting. :)

Instead of placing the embellishments on the outside of the felt, like I did with the votive holders...

...I 'sandwiched' them between two thin layers of roving, instead.

I used small bits of any white or off-white fiber, fabric or yarn that I found in my stash...

...and placed them roughly parallel to each other during my layout.

After adding a second layer of fiber (perpendicular to the first)...

...I proceeded to felt the piece as usual.

To make the finished pieces wide enough for adequate coverage (including gathers for fullness)...

...I laid out roving two-and-a-half times the width of each window...

...and one-and-a-half times the height.

Next time: the finished valances in situ.

Posted by Heather Woollove at 2:30 AM

looking good Heather, can't wait to see them finished. I made double sided two layer nuno full length curtains a few years ago and they're still much admired

wow, what a lot of work! but totally worth it:)

Angela--Yours sound wonderful! I have a lot of 'sheers' that I would like to replace as time goes on and I love the idea of using nuno felt for them!! Thanks for sharing!
Riet--Yes...they took me most of a week (working every day), but I'm happy to have a light-filled studio, now!

You must have needed a huge working surface!

Can't wait to see them!

Rachel--Yes...the studio table is big! :)
Andrea--I hope you'll like them!

Look forward to seeing them in place :)
You must have a lovely light studio with 4 windows in it
x

Deborah--You would think so, but it's in the back of the house and it's only bright during certain times of the day. (It doesn't help, either, that I work a lot at night when I can't sleep!) :)
I really need to address my overhead lighting situation one day soon. XXO-