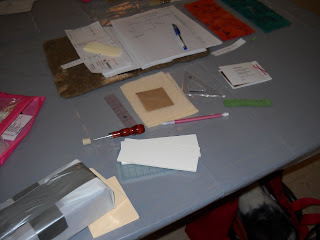 Some of the bookmaking tools used to make Chad Alice Hagen's 'feltbook with limp binding'. 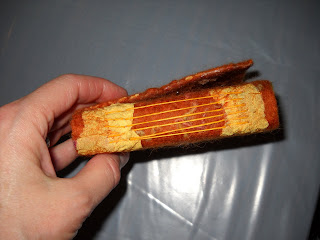 The spine of my feltbook---sewn with waxed linen thread. 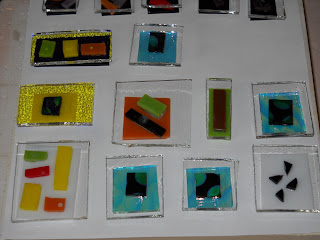 Glass that I'd cut and glued...awaiting firing in Jone Rakoski's glass kiln. 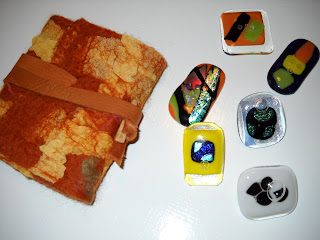 You may recognize the cover of my book...

I used a template to cut the felt to size...

...then covered it with a thin layer of matte medium.

A leather spine strip was glued to the felt...

...and sewing stations were poked through the leather and felt.

A text block was made with 36 sheets of paper...

...by dividing the paper into 6 signatures.

After stitching the paper into the felt cover...

...I glued a leather thong to the cover and wrapped it.

For the fused glass buttons, we first learned to cut glass safely...

...then assembled three-layers of glass for each one.

The pieces were glued together with small amounts of white glue...

Holes were drilled through some of them...

...and button backs were UV glued to the backs of others.

Neither project was one I could imagine doing on my own...

...but with step-by-step instruction and guidance, I ended up with quite respectable end products!! :)

Posted by Heather Woollove at 8:56 AM

Love your glass works and your book is wonderful. Didn't we have fun!