Laying out a thin layer of blue roving and rolling it in bubble wrap to make holes in the pre-felt. 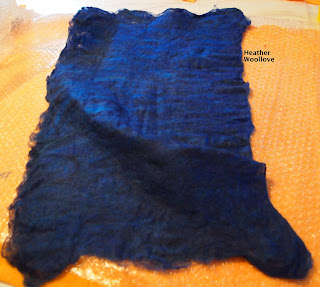 Adding a layer of white and green roving to one side of the perforated pre-felt. 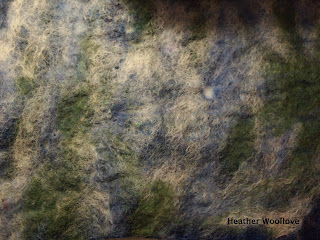 The finished felt...showing white and green in the 'open' areas. 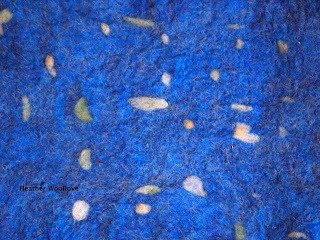 The same piece held up to the light.

(You can see that the white/green layer is very thin and translucent.) 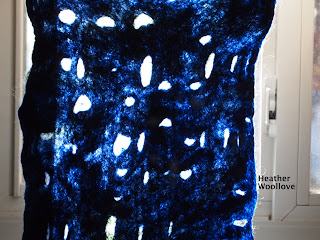 After stitching and trimming around the open top of the cube. 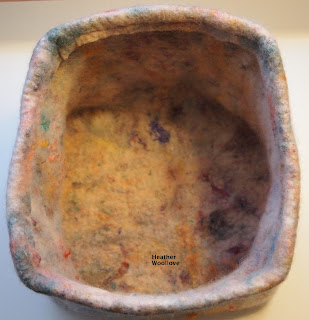 The finished cube with a circular embellishment... 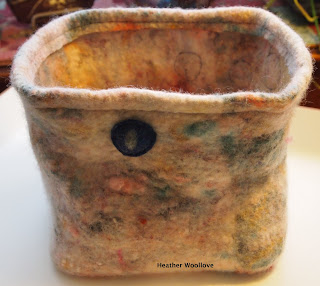 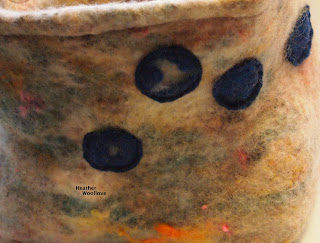 When I was at Felter's Fling, one of my classmates made beautiful, cobwebby pre-felt...

...by laying out a thin layer of roving on bubble wrap...

...and rolling it very fast and hard for a brief time.

This pre-felt could then be laid out on a second layer of roving or pre-felt...

...for a lovely decorative effect!

Since this cube project cried out for a bit of embellishment...

...I decided that it was high time to try this technique!

After felting the 'perforated' blue piece...

...I cut it into circular bits and machine stitched them to the cube.

I also stitched around the top of the cube (to hold down the flaps)...

...and trimmed off the extra felt.

Because I used a very thin layer of light colors for the back layer of the blue felt...

Next time: A painted silk messenger bag that is a collaboration with a friend!!

Posted by Heather Woollove at 8:51 AM

wow love it! love the cobweb to work with anyway:)

I love cobwebfelt!! And you used it beautiful on the cube! Great idea. hugzz...peebee ps. I hate to steel ideas but this one is tempting ;)) hugzz...peebee

Riet--I've been doing more cobweb projects lately and I really like how soft and fluid they are!
Deb--Thanks!!
Peebee--Please use anything you like from my blog!! I always appreciate a 'shout out' if you take something directly from me, but that's honestly the reason that I write it...to help other felters like I've been helped in the past!!

Thanx Heather, I know that your blog is educational, but the little ornaments are so you! But I wil use them in a different way, more me :)) hugzz..peebee

Peebee--I can't wait to see what you do with them!!

awesome!! I love the cube! I could see a million uses for it!

Very clever! I love that shade of blue more than I can say.

Kelly--I'm glad you liked it!!
Mary--You know I'm not a 'blue girl', but I really do love the clear windows in this piece of felt...it sets off the blue in a lovely way!! :)

When so many of my beginner's felting instructions make a big thing of making sure there are no holes in the felt, it's good to know there are things one can do with holey felt!

Rachel--Have you ever seen the online catalogue for Fashioning Felt? http://exhibitions.cooperhewitt.org/Fashioning-Felt/objects
I think you will find lots of inspiration for 'holey' felt there!! :)

I've been absent too long. You have been really busy here, and I'm playing catch-up. Love the cube. I really like the marbled appearance of the wool. Again, great piece my friend. :)

Sandie--I'm glad you like the look of the cube. I wasn't sure what I thought of the white + color there...that's why I felt like it needed some embellishment.