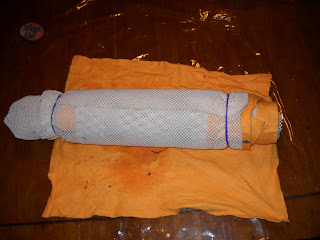 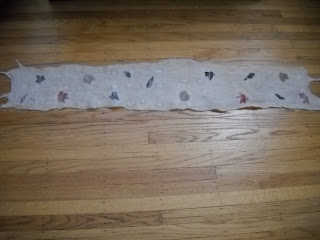 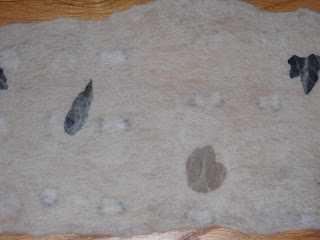 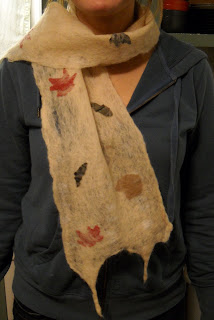 I'd been wanting to do more with natural dyes.

...so, on an early morning walk one day, I picked up a bagful of black walnuts from a neighbor's sidewalk and grass.

Having been lying there for some weeks already, they had a particular odor which I can only describe as repungent. (A portmanteau of repugnant and pungent!)

...but since they did not look moldy or rotten to me in any way, I persisted in my experiment and boiled them for some time in water (with some added salt) as various internet sites recommended.

Meanwhile, I made a thin and light scarf out of white roving (the better to see the color effects, I thought!)...

...inlaid with pieces of silk in various Fall colors, cut into the shapes of Philadelphia area leaves.

Since rolling is the least favorite part of scarf making for me, I am always experimenting with ways to get out of some of it. :)

...and my latest innovation is to roll up the scarf in the pierced rubber matting that I use instead of bubble wrap...

...secure each end with a rubber band, and then bounce it on my table, turning it as I go...for quite a long while.

It's fun and it makes a really loud noise. (I love this!)

...but don't try this at home unless you have a table like mine, which is sturdy and which already carries the scars of many family meals and craft projects!

Then, I clipped the scarf in multiple places, for a shibori dyeing kind of effect, and threw it into the dye bath.

When all was said and done, and after all of this work, my scarf was only a very faint oatmeal color, except where the clips had been, and there you could see 'eyes' of brown dye with white centers.

Tomorrow: the fix.
Posted by Heather Woollove at 9:05 AM

The scarf looks great though....I guess you could always put in back in the dyebath,maybe it needed a little longer if you wanted a darker colour.