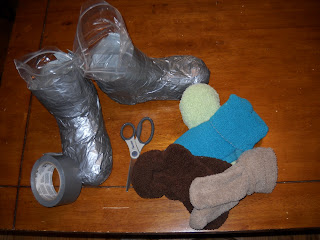 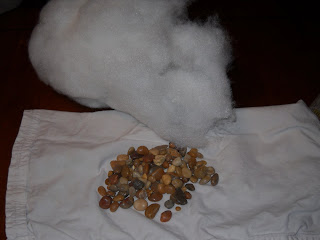 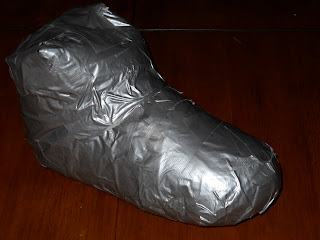 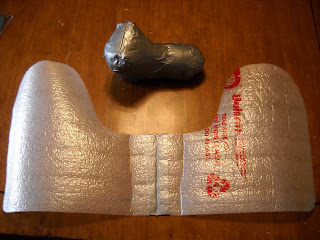 Definition: last (last, läst)
(noun)
A block or form shaped like a person's foot, on which shoes are made or repaired
Etymology: ME laste < OE læst, a boot, læste, shoemaker's last < base of last, footstep, track, furrow < same base as last

I've been wanting to try felt slipper-making for some time, now.

It was actually quite fun to do, but I did have my felting friend, K, in stitches as I described the last-making process.

Picture it: my feet, each swathed in four 'fuzzy socks' and a baggie...

...being set upon by two scissors- and duct tape-wielding teenagers.

Once each foot was covered with a double layer of tape, the tape 'form' (plus plastic baggie) was removed and filled with small stones (for weight) and polyfill, then taped shut.

I have it on good authority that this is not a 'one-person project'...so ask your children for help if you try it! (It's quite the family bonding ritual!) :)

Of course, this post is meant ironically, since other than making the lasts, and (finally-yesterday morning), cutting out my resist pattern...

...I have done nothing more about starting these slippers!

Watch this space, though...

I plan to take a stab at them next week.

Posted by Heather Woollove at 9:42 AM

I make felted slippers too ,but never made a mold like this. I just use a flat resist and after the felting is nearly done I put them on and rub while it is on my feet.....
Normally I try to make felted slippers when we are with 4 people around, so we can help eachother get a nice foot massage, hihihihi