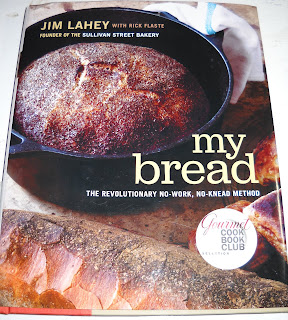 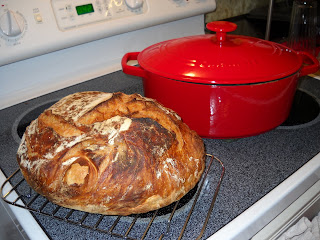 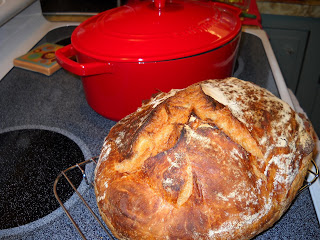 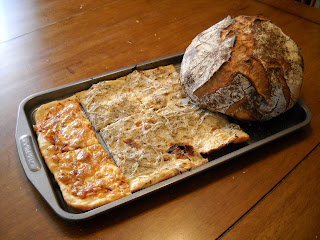 I received a new cookbook for Christmas.

I have rather a lot of cookbooks...

...since cooking is kind of a passion of mine.

I had been reading a lot about the 'slow-rise, no knead' method of bread-making in blogland, lately...

...so I asked for this particular book, because it's gotten rave reviews.

The thing is, everything you thought you knew about bread-making has to go out the window when you're thinking about baking these puppies.

...you have to think about this bread a full day (in the Winter, anyway) before you want to eat it...

...and you have to have an enameled, cast-iron, lidded dutch oven to cook it in.

In other words, it's kind of a committment...

...it's like before you've even 'kissed him', he wants to know whether you want to 'go steady'! Grin.

The bread is gorgeous, and it tastes as yummy as it looks.

There are nooks and crannies for butter or honey...

...and it makes great toast the second day.

The pizza crust takes a mere 2 hours to prepare...

...and there's a topping recipe using thinly-sliced onions, cream and thyme that could make a grown man weep with joy.

So if you're looking for a new 'kitchen boyfriend'...

Posted by Heather Woollove at 6:36 AM

That is the most beautiful loaf of bread I have ever seen!

I agree with above! It looks amazing. Mmm nothing quite like fresh home made bread huh?