Wetting out a layer of variegated green merino roving... 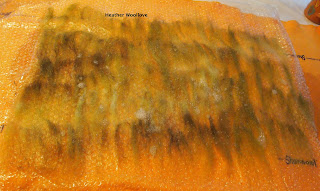 ...and rolling it in bubble wrap to open up some 'cobwebby holes'.

Adding a pop of color in layer number two. 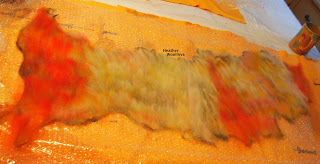 The 'fish tail' end of the finished scarf (showing the brightly-colored side)... 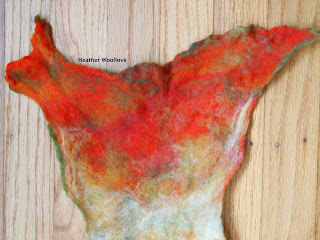 ...and the reverse, with the original green layer showing. 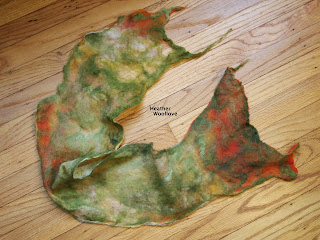 Doesn't this end resemble the pincers on an earwig? :) 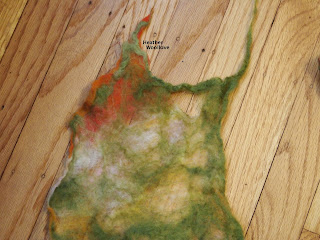 Here, a demure bit of bright color peeps through the lacy texture of the original green roving. 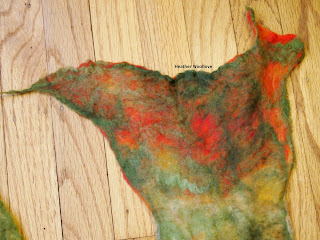 I confess that I have rather ambivalent feelings about cobweb felt...

...and I've been trying to sort out exactly why.

I know that its fragility concerns me a bit...

...since I like my projects to be able to withstand quite a lot of abuse! :)

I also think that they are slightly more feminine than most of my pieces are...

...and I find myself uncertain about the 'end point' as I work, as well...

In any case, this was a project that I made last summer...

...that I'm finally sharing with you.

I laid out a layer of green variegated roving, wetted it down...

...and rolled it energetically in bubble wrap in order to open up some holes in the felt.

I used a couple of other fun colors for layer two...

...and felted the piece until it held together well, but was still soft and pliable.

I like how the colors from the second layer show through the open spaces in the first one...

...and the wonky ends of the scarflette really appeal to me, too...

...despite (or perhaps because of?) their rather biological appearance!! Giggle.

Posted by Heather Woollove at 3:50 AM

You always choose the most wonderful colors! I cannot wait to see how it turns out!

Ooops, Pumpkin...I hate to tell you, but that is IT. It's finished! (Perhaps you've made my point more eloquently than I did, about not knowing 'when' cobweb projects are done.)
...or maybe you're just surprised that there's no Part 2?!
:)

Maybe you feel felt is not well-suited to fragility? I know I'd be concerned about the balance between it being sturdy enough to survive, and delicate enough to be soft and appear fragile...

Rachel--I like other people's cobweb work very much...but yes, I think that may be part of it...concern over the 'survival of the cobwebbiest'! :)

Since beginning felting,,,wet or needle,,,"when is it done" has always been an issue for me . I've found a good balance in needle felting but have the same fears of cobwet felt getting snagged and ruined to easily . It's harder to make something that you would be afraid to wear yourself...?

that said...forgot to add that your piece is lovely but I would probably feel safer having my wall wear it then dare wear it myself .

Krex--It's nice to know that others feel this way, too. (and I actually gave it away to a friend, so the 'worry' is all hers!) Grin.

I love the orange peeking through the green Heather.. its very pretty - it really reminds me of koi carp.

I always feel theres a time and a place for cobweb.. its like anything thats very fine and lacy - worn to look pretty. Its absolutely perfect for wearing to weddings, or fancy 'do's'.. and its actually more resilient than it appears (so long as you take a degree of care, but thats the same with anything fine and lacy).

I'll bet you would of been fine wearing this to work.. I can almost picture you in it.. I am sure your friend was happy to receive it
xx

Deborah--Hahaha...how you must imagine my workplace?!?! Actually, you may have hit on the biggest reason that I don't find much utility in cobweb pieces...I rarely go anywhere 'fancy'!! :)

I really like the "scarfette." Of course, the colors have something to do with that, but it looks very light and airy too, so it wouldn't smother. I like that about it too. :)