Goldilocks and The Two Scarves 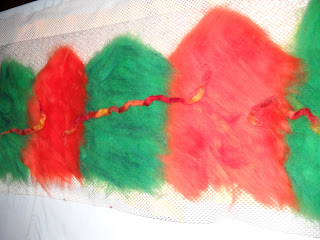 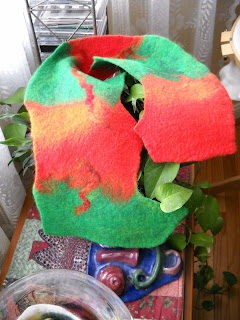 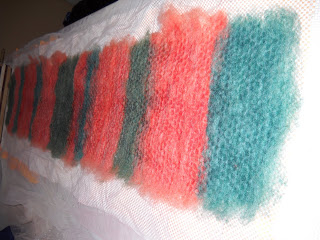 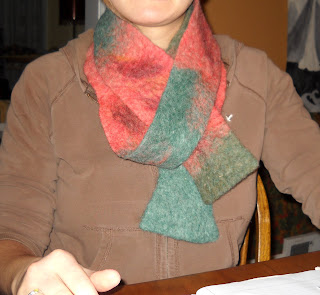 With my college girls all heading home for the holidays last week...

...and with a dorm friend and a new boyfriend in tow for a long weekend...

I decided to make the 'boy gift' first, since, as the mother of four daughters...

I asked my daughter to list his favorite colors (orange and green), and proceeded to make scarf number 1...

...this one, unfortunately, turned out to be a bit too bright for her.

...I set out to make one which would please both of them a bit more.

Unlike the first short, squat scarf, I made the second one quite long and thin...

...so that it could be wrapped multiple times around the neck.

Unfortunately, this one wasn't "Just Right", either (too stripey!)...

...but at this point, I told her that I was through.

...my daughter would never actually say that she didn't like something I made.

It's just that this particular child...

...never would be able to make any money playing poker! Grin.

We decided that R (the boyfriend) would get both scarves...

In the tradition of the three bears, however, I did make a third scarf for a dorm friend of one of my other daughters...

...and it was a lot more well-received. Yay!

(But isn't this how the story of Goldilocks and the Three Bears goes?) Grin.

Posted by Heather Woollove at 4:16 AM

So it's busy month for making presents for our loved ones. The scarves are good.

I'm having an almost identical experience with crochet hats & my sons & his friend! The hat for my daughters friend HUGE success - everything I make for the boys though my sons thinks is too girly! Though extremely nice he assures me!! Boys are difficult to make for...

heather, 4 daughters, what a blessing! i can see your problem making boys things, but...
i have 1 boy, 1 girl and for both i can't make anything. i can see on their faces that they don't like it. however, when i made a scarve for a friend, my son loved it so much that he got it, and my daughter made her own, together with me. so:problem solved.
lots of luck, love, riet:)

tehehe, I hear you.

My daughter has "politely" rejected all of the knitted goods I've made for her (luckily I always find a new recipient) yet seems to find anything I knit for myself pretty amazing so...she has some great gloves and hats and I still am at the drawing board.

I like both scarves but the longer one that can wrap is my favorite of the two...of course, I love stripe. Merry Christmas!

Oh, what a JOY it is to read all of your wonderful comments this morning!!! I hesitated before blogging about this, since I didn't want 'the world' to think that my daughter is an ungrateful or spoiled person...this is the child who is graduating in May with a degree in Civil Engineering, plans to go to grad school and then into the Peace Corps.
It's reassuring to hear that many children don't find their mothers' art exactly 'to their taste'!!!
It sounds like the trick is to make something for yourself and then just wait for one of them to snatch it off your jacket or head!! :) XXO-

As a mother of 2 daughters, I can totally relate to this post. :) Not sure what to call the strange phenomenon of them wanting what we make for ourselves....but it happens here too!
Scarf number 2 gets my vote, but thats only because I love the way the colors merge into each other! I too have a scarf on my agenda today...let's hope they like it! Have a fabulous day my talented amiga!

Thanks, Kelly! I can't wait to see how your new scarf comes out!

I think both scarfs are great...I lvoe color... but have the same problem trying to make felt look "manly" . My BF and I are both aspies and no more"politic" then your daughter when it comes to not being able to fake liking something. It use to drive my mom crazy because we had such different tastes . I actually prefer honesty...I would hate to spend the time and money making something that is just going to end up in a drawer .

I hope you all have a lovely holiday .

No one can say you didn't try hard enough. Give him time to soak it up and wear it a little. Once they feel the snuggly warmth, he'll never let go of it, if he's smart! LOL

I really liked that orange and green scarf, and didn't think it looked too stripey at all. But what do I know, right? Oh well.

Krex--Thanks for your note. Happy holidays to you, too!!

Well, I'm chiming in a bit late:-) It's the age-old dilemma that men are always harder to buy/make/ choose for, than women. It starts at birth...All the really cute baby things are for the girls, and the boys section, fairly mundane. Good for you...shake things up a bit... bright and beautiful...just like you:-)